OxyShred by EHPlabs is a scientifically researched and efficaciously dosed potent thermogenic fat burner.  It will stimulate your body’s fat receptor cells and boost your metabolism to promote an increased level of fat cell break-down, known as “Hyper-Lipolysis”.

OxyShred also has the added benefits of kick starting the metabolism, boosting immunity and providing a natural boost of energy.100% natural delicious flavors makes OxyShred a pleasure to drink.

EHPlabs Oxyshred, the most potent thermogenic fat burner ever developed, will take your body to a new level of fat burning – “Hyper-lipolysis”. In other words, turbo fat burning.

Unlike other fat burners on the market, OxyShred is not a heavy stimulant based thermogenic. OxyShred has been pharmaceutically engineered to switch off your body’s “fat memory” – the Apha-2 receptors and to stimulate your body’s fat burning hormones – the β2-adrenergic receptors to mobilise the existing subcutaneous stubborn fat cells to the mitochondria to be converted into energy in the form of adenosine triphosphate.

Burn fat, have more energy, look great, feel happy, love life! OxyShred is the most advanced and potent thermogenic fat burner ever developed. OxyShred induces hyper-lipolysis, which is a complex process of super-efficient and enhanced burning of the subcutaneous fat molecules. The key HYPER-LIPOLYSIS MATRIX is a scientific break-through based on proprietary ratios and concentrations of the following ingredients:

Chromium Picolinate: This chemical compound is important in restricting insulin resistance and glycogen tolerance levels in the body. Research findings indicate that chromium picolinate also reduces carbohydrate cravings. By consuming less carbohydrates, the body is forced into ketosis mode where it burns fat to fuel the body.

Higenamine: Higenamine is a beta-1 and beta-2 adrenergic agonist, meaning that it will stimulate the nervous system to boost metabolism and promote the break-down of subcutaneous adipose tissue (stubborn fat cells stored under skin).

Higenamine encourages your body to release triglycerides from your fat cells, and when combined with acetyl l-carnitine, the free form fatty acids will be transported to the mitochondria to be converted to pure naturally produced energy.

Conjugated Linoleic Acid: Scientific research findings suggest that CLA works by blocking the main enzymes that are responsible for encouraging fat cells to store additional fat and expand in size. The specific CLA used in OxyShred is CLA-10. This form of CLA is responsible for the metabolisation of fat cells.

Grapefruit Seed Extract: This important thermogenic ingredient is abundant in polyphenolic compounds and provides an anti-obesity effect and an enhancement of insulin sensitivity (which is the opposite of insulin resistance).

Most notable among these compounds are anthocyanins and proanthocyanidins, which are two types of flavonoids. Also present are non-flavonoid polyphenols, such as the longevity-inducing compound resveratrol Oleuropein: The EHPlabs research scientists identified oleuropein as holding numerous fat loss activating properties. In an animal study conducted, oleuropein raised the thyroid hormone T3 by 2.5 times above the standard levels. In a separate animal study, oleuropein increased noradrenaline and adrenaline secretions, as well as uncoupling protein 1 levels in brown adipose tissue, leading to increased thermogenesis and lipolysis. 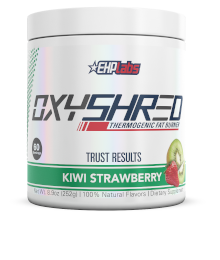 OxyShred has the ideal dosage of oleuropein for optimal lipolysis. Guggulsterone: Numerous scientific studies have shown that guggulsterone can significantly lower both serum low-density lipoprotein (LDL) cholesterol and triglycerides. This promotes the oxidation of fat cells in the body. Guggulsterone has also been found to be a powerful antioxidant, anti-arthritic, anti-inflammatory, memory enhancing and anti-cancer pharmacological activities.

Raspberry Ketones: Raspberry ketones have been referred to as nature’s miracle weight loss ingredient. Raspberry ketones contain a substance that is very similar to synephrine. Synephrine has thermogenic effects on the body that promotes increased metabolic rate, supports a normal, healthy appetite, and supports energy (ATP) production. Since the active ingredients in raspberry ketones resembles synephrine, research papers suggest that it may help support a similar weight-loss effect. As a natural compound, raspberry ketone enhances fat loss without the harsh side effects of synthetic diet compounds.

OxyShred is the world-first ultra potent thermogenic fat burner to include immunity support ingredients. This is because the body undergoes significant physiological and hormonal changes when it speeds up its metabolism and oxidizes fat molecules. EHPlabs wants to ensure that you remain fit, strong and healthy while losing weight and have thus included the following immunity boosters in OxyShred:

L-Glutamine: L-Glutamine is the most common amino acid found in muscle cells. It is essential for optimal immune system functioning, strength, stamina and recovery. Vitamin C: Although the body does not naturally produce and store Vitamin C, it is essential for the proper functioning and boosting of the immune system. OxyShred is loaded with sufficient amounts of Vitamin C to ensure that your body is strong and fit while you shred excess fat. During their research, EHPlabs scientists found that volunteer subjects experienced mood swings and low energy while dieting without OxyShred. OxyShred has been specially formulated with the following ingredients to ensure that you are happy and energetic while shredding fat: 1, 3, 7

Trimethylxanthine: Commonly known as caffeine anhydrous, it is the world’s most popular energy supplement to boost your energy levels while dieting and to assist in additional fat metabolisation. It also boosts muscle strength and endurance. Caffeine from guarana, coffee, or green tea is good, but many people find it less effective than the anhydrous form, which has been shown to boost performance in clinical studies.

Tyrosine: EHPlabs laboratory and clinical studies have found that tyrosine supports energy production, stamina and focus, without any jittery side effects. The body processes tyrosine as a precursor to producing several important hormones and neurotransmitters, such as epinephrine (adrenaline) and dopamine.

Taurine: When taurine is combined with caffeine anhydrous, EHPlabs studies have found that muscular endurance may increase up to 50%. B Vitamins Full Spectrum: OxyShred is one of the only thermogenic fat burners on the market to contain the full B Vitamins spectrum. B Vitamins are essential for energy production. 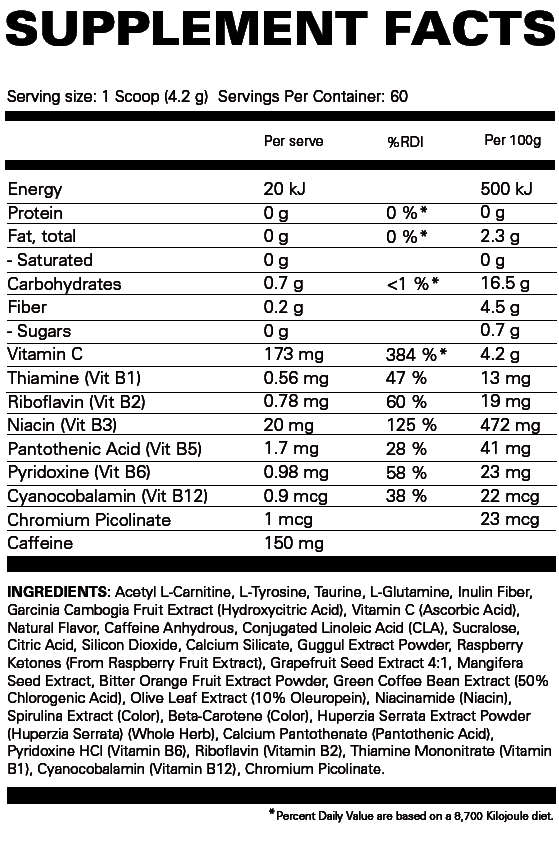 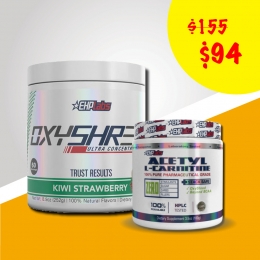 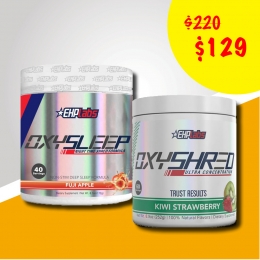